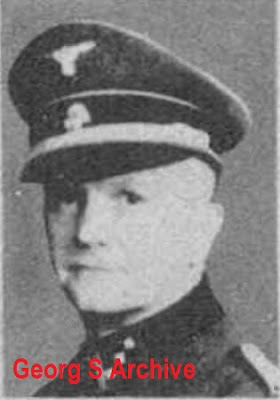 Paul Heussler was born i Rottweil on January 19, 1890, he went through school and in 1914 he volonteered to Frontduty, he was not part of WW I for a long time as he was released from duty in October 1914, because of Illnes. But in 1915 he once again volonteered for front duty and he participated throught out the war until the Austrian / German defeat in 1918.

After the war, he had different jobs, but after he married Sofie in 1922 they took over a Gasuhaus in Pflug. This was also the first offcial house of NSDAP in 1928. In 1930 Heussler joined the SA, but he he must soon have been transfered to the SS, but exact date is unknown. But in 1936 was he released from the SS, when he didn´t have fulfilled the official application for an SS-Mann, Paul Heussler sent an letter of plea in 1937, and shortly afterwards he was once again accepted into the SS.

In 1940 Paul Heussler was once again transfered, this time from Allgemeine-SS to Waffen-SS, his first unit is unknown. But after that he became SS-Ustuf d.WSS he was sent to SS-Flak,Abt. Ost. Wich he was part of until 1942. After that he was trained to become a  dog handler, and from 1942 to the end of the war, he was part of the KL System.

There are two versions of Paul Heusslers fate, one claims by Inmates of the Aussenlager Barth (Ravensbrück) that he left the camp in a car at the day when the camp was dissolved (30.4.1945) another version says that Heussler stayd  in the camp after that the inmates and SS left the camp shot himself inside the camp.

But still is he listed as MIA at the german Red Cross.