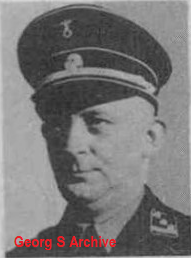 Kurt Stage joined the NSDAP as early as in 1925, shortly afterwards even to the SA. Was in 1930 appointed to form and raise the SS-Sturm Potsdam,which he did. In 1931 he was appointed to Pressereferent for RFSS. In 1934 he became he member of the SD (Sicherheitsdienst) and in 1935 he became part of Gestapo Department IV 1a.

Kurt Stage was in 1941 sent to Norway, and  remained his task to search for partisans  and anti german groups. After Norway he was sent to Marburg (Slowenia) with the same task as in Norway. In this office he would remain until the end of the war. Stage fleed to Austria and hid. He was later taken and placed in a POW camp Tamsweg. In wich he would be arrested on June 1 1945 by British Forces.

Stage was also a witness in the Nürnberg process and was later placed in the UK POW camp for SS personell at Neuengamme. From this camp was he turned over to the Yugoslawia Forces in october 1946. They held a trial against Stage and was later sentenced to death and it was carried out in August 1947.

Obviusly didn´t Kurt Stages family know his fate and reported him as MIA to the DRK. In the ad is he listed as SS-Sturmmann (Private). When they did that he had been dead for years. Kurt Stage is not the only one who had this fate. Many others had been taken by Allied and Russian forces and without letting the familys know their relatives fate. More will come about those examples.